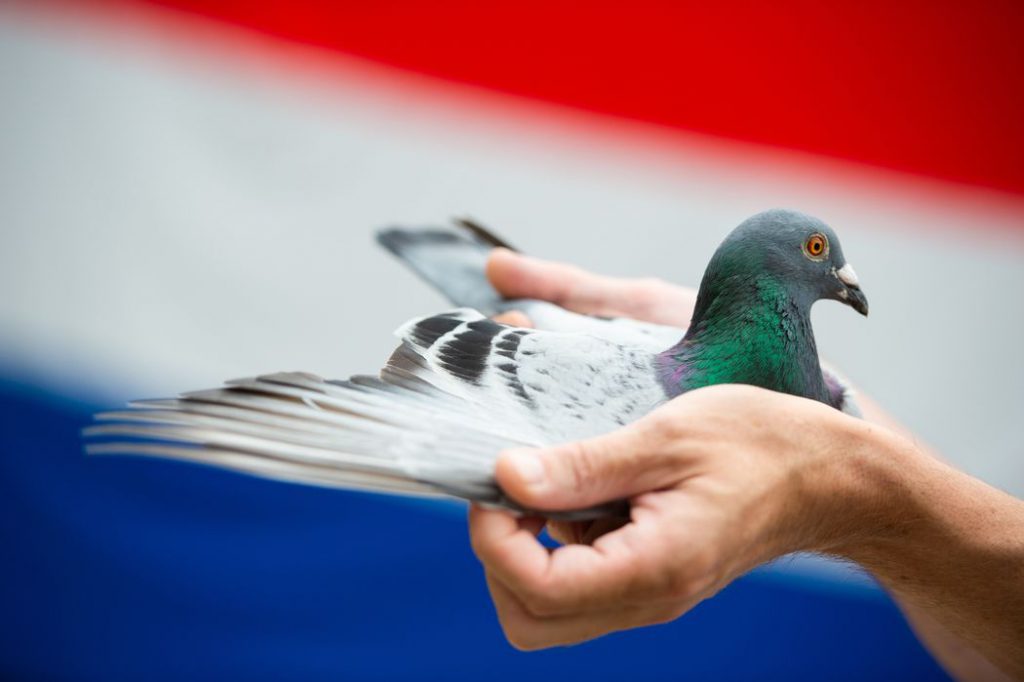 As one of the last youngsters born in the spring of 2016 (only Red Harry was a little later), TGV was raced in the young bird races. Due to the limited number of young offspring that was bred, TGV and his male loft mates were withheld at the end of July 2016 after five young pigeon flights. As a yearling, TGV immediately left as the train from which its name was derived. With results such as

he became 1st pigeon champion Speed in the club.

After that his performance dropped a bit and in the one day long distance he only achieved a 58th NPO at Argenton. Not really a reason to stay, but given that he was just a yearling and still showed some class, he got another chance in 2018. And he seized that opportunity with both wings … 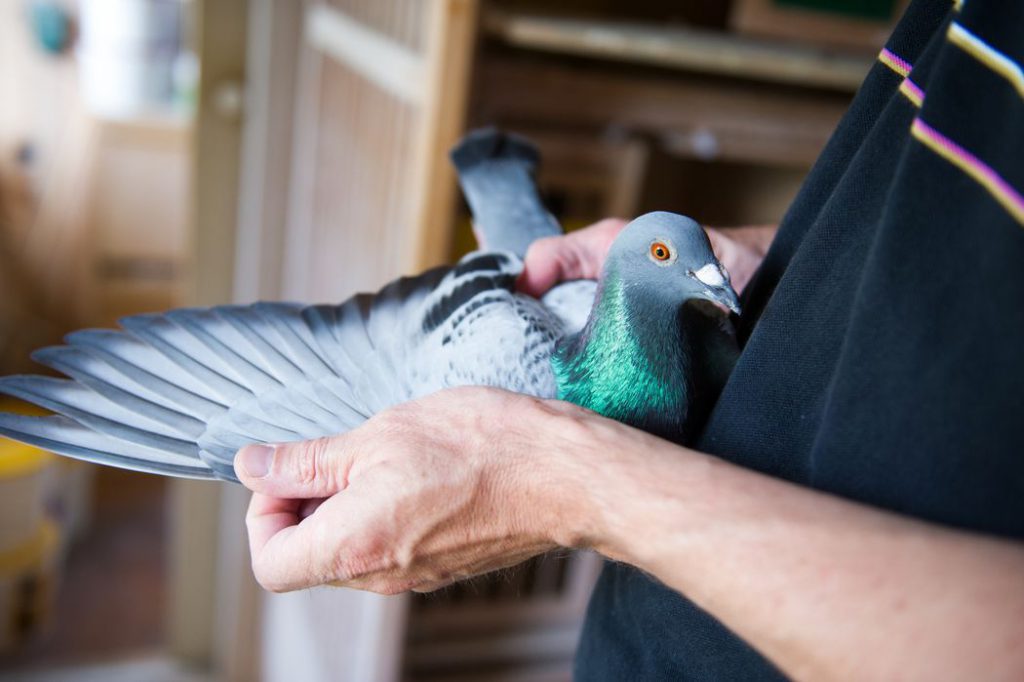 Already early in the spring a nice prize was achieved on the Speed race from Asse Zellik: 65th against 2,865 pigeons and with a few smaller prizes, they were warmed up for further work. And it got hot … The hottest summer since 1976 with weekly wind from (north) east direction. All flights were tough. And from 20th May TGV comes into shape. On Pont Saint Maxence (387 km) a 25th in Region 4 against 2,587 pigeons. In the whole of North-Holland this is a deserving 72nd place against 11,726 pigeons. Then comes the first Long Distance flight from Pithiviers (514 km). Not yet fully convinced of his skills on the further flights, TGV is basketed as 3rd nominated. He is not the first to arrive at the loft but with a 23rd NPO against 5,717 pigeons he brings in a lot of designated points.

After a week of rest, the second Long Distance flight from Issoudun (650 km) follows. Due to poor visibility on the route, the flight was returned to Laon with just 329 km. Now his high basic speed comes in handy, because most of the Long Distance pigeons are sprinted out. Resulting in a 7th NPO against 4,185 pigeons. Great result, but it doesn’t help you because the flight does not count for the Long Distance in the national competitions. The realization came that we are dealing with a talented pigeon. From then on he was always placed as the first signed and that confidence was not betrayed.

On the first sector flight from Chateauroux (669 km), he was put at a considerable disadvantage by loft mate “Juno” who played a 2nd in North Holland and a 5th in the sector against more than 12,000 pigeons. But a 30th NPO against 4,067 pigeons is of course still a top performance. And then after 3 flights you are 1st champion pigeon Middle Distance in North Holland. With 3 flights left, anything can happen. And certainly on an Argenton (698 km) with a headwind. Then you have to come from a good family to hook up. Many pigeons have already dropped out because they simply cannot cope with the circumstances and even more so over it. And then after 10.5 hours, three pigeons arrive within 1 minute. TGV manages to be the first to sprint into the loft and therefore wins a 7th NPO. Red Harry, half-brother of TGV becomes 8th and the 020 alias De Amsterdammer (cousin of TGV) becomes 9th. This time against 2,853 pigeons.

And then comes the flight of the year: National Chateauroux. Could we shine on this again like in 2016? With a strong North-West wind we unfortunately find the worst scenario imaginable. Nationally it can not be early but in North Holland we must be able to have an early arrival? And again TGV is the first to tap. Only 10 minutes from the winner of the competition, but they are fast so no place in the top 10. He becomes 14th NPO against 2,217 pigeons.

The national magazin ´Het Spoor der Kampioenen´ came by postmail on Friday. And to our great surprise, we see that TGV is in provisional 2nd place in the Long Distance in the WHZB / TBOTB competition. Behind a super pigeon from Lisse. But because in some departments the 2nd flight was not released at a Long-distance distance, the 6th and last day-distance flight also counts. So we have another chance. But yes, what is the chance that TGV again takes a top prize. Then everything should be fine.

Like every day you enter the loft and look at your best pigeon. And then it appears that there are two pens in his nest box. Well # @ $ # !! His 1st and 2nd pen thrown on one side at a time. A large gaping hole in its wing. It also feels a bit thin. Even has some bad manure. Doubt strikes. Can he still strike again? People start calling and a lot of money is offered to buy it. But we do not sell it and certainly not for the flight. Chinese people come to watch TGV. Even the evening before basketing the last flight. The two growing pens have not grown as far in the way they should be. Yet TGV feels good again. He’s going to be basketed!

Just before basketing we hear that the flight from Gien (550 km) is shortened to Fontenay (513 km) due to the heat. Well, that may not be entirely detrimental to him given the course of the previous two weeks. Normally we are not so nervous about a flight, but now the tension was very high. The last flight. Make it or break it … In the garden, hot weather, with the usual viewers there. And then suddenly a pigeon. We didn’t see him coming because he was from the west. On the swing, on the flap and in it. Almost too fast for the camera. But it was the TGV again so that was a good sign. Reporting. Not the first report in the club. That is usually not a good sign, but our club flies so well that it says little. This time also. 4th report on compuclub live. That is not bad. In any case, thus becoming the 1st Champion Pigeon in Section 6 North-Holland and the necessary 1st championships in the Long Distance Club of division 6 North-Holland.

But what about WHZB? Of course, we looked at the performance of the competitors and there could not be much for it? 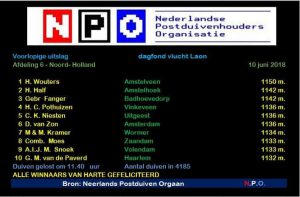 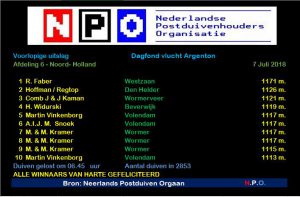 Pretty soon after the flight, ‘Het Spoor’ fell on the mat with a new position. NUMBER 1 !! Don’t you believe that ?! Okay it is still provisional but still. The weeks go by and then the official final ranking is published in the newspaper of September 21. 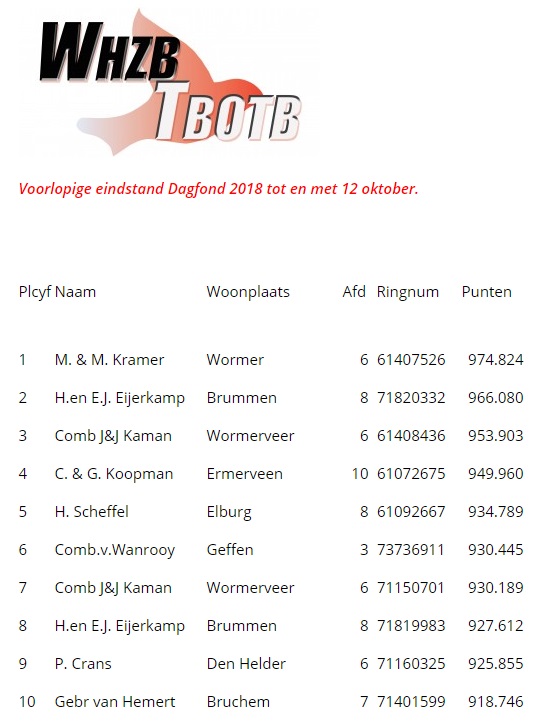 TGV is the Best Long Distance Pigeon of the Netherlands in the competition WHZB/TBOTB 2018. 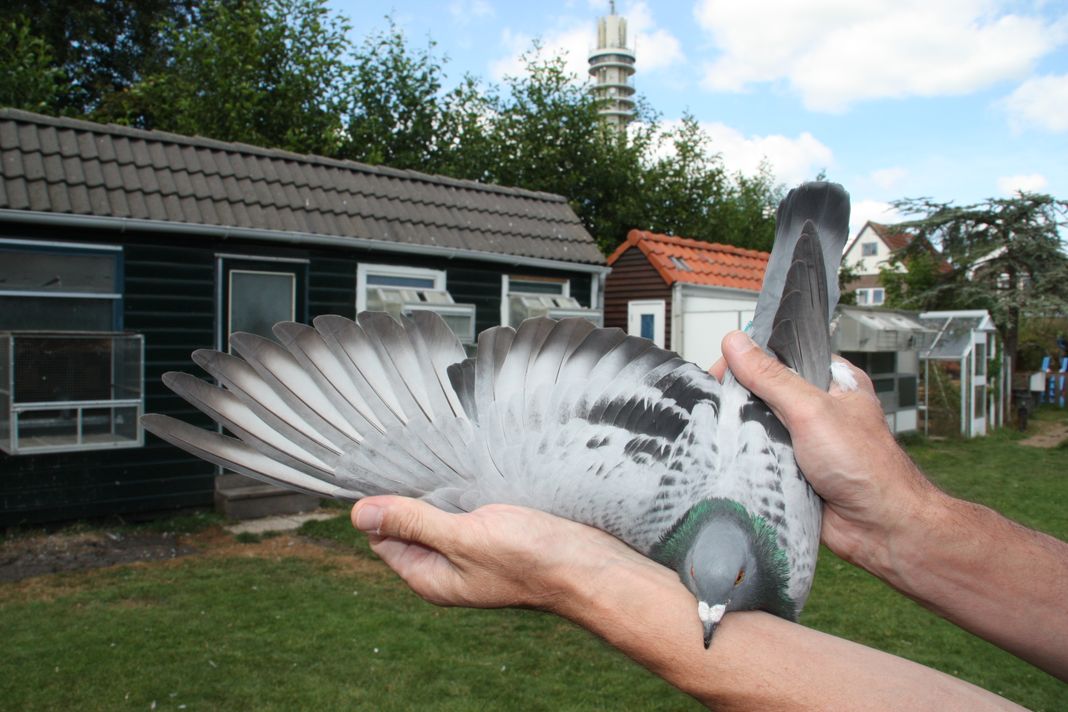