And then we already have the last one day long distance race of the season. Vierzon National. After the five previous flights, we are at the top in all not-nominated rankings. But then you still have to complete the competition and that is always exciting. Can we deliver a top performance again?

It was clear long in advance that it would be a moderate NW wind on Saturday. No national prospects. That is why there was a little hope that they were released on Sunday with a SE wind and a nice sunny day. That was not to be the case and so it became a tough flight with a headwind and lots of clouds. The first pigeons fell as expected in Limburg and then it is waiting for the first pigeons in the sector. And then you can still pull 30 mpm off with that wind, given our large overflight. So we hoped to get a pigeon before 5 pm to be in good shape. Unfortunately we did not succeed, but at 5:05 pm Son Blueliner (Blueliner x Sister Jens) arrived again first. After an 8th and 11th NPO we hoped for a spot among the first 10 in Section 6 North-Holland. For a long time it remained exciting because he was in 10th place live at Compuclub, but the overflight still had to run. Fortunately it was ok now and we had that much-coveted top-10 place in the pocket.

Four minutes later we “booked” Duncan (Mr. Veenendaal x Denise). After his 4th NPO on the first Fontenay, now the 15th NPO. Not bad. Also the Amsterdammer (020) shows himself again on a tough flight with the 35th NPO and with 6 pigeons in the first 90 we can be satisfied again. The not-nominated championship in Section 6 North-Holland and the Long Distance Club North-Holland is a fact! And 9th best loft performance of Sector 2 – Grand Masters of the 217 lofts, the furthest distance of 618 km in this top 10! 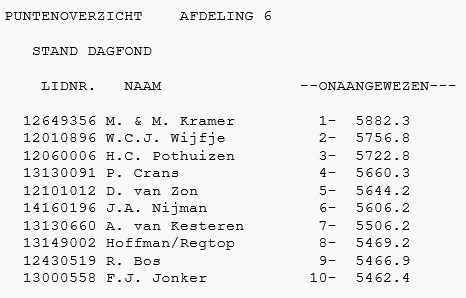 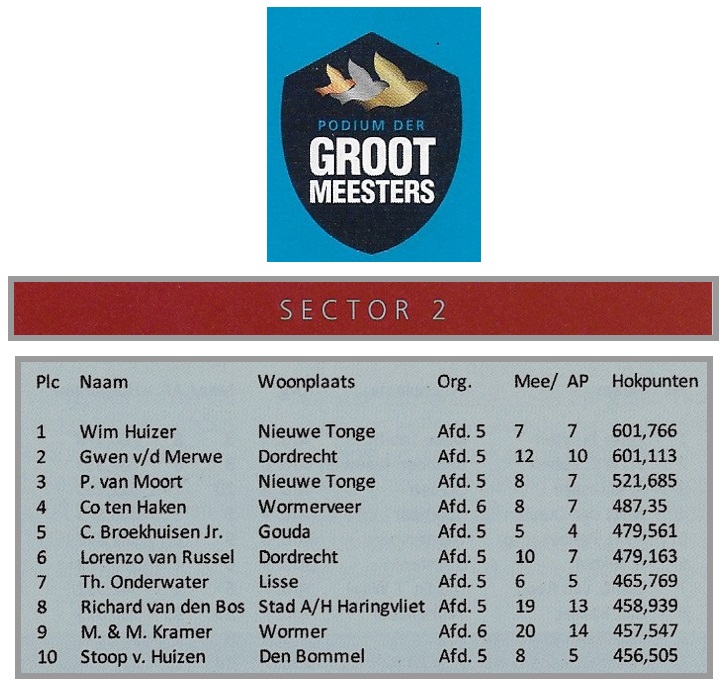 After the victory over Argenton, the next assignment was a flight from Blois. Actually Argenton (700 km.) Was on the program again, but the last Argenton had left its mark and so the flight was shortened. And again the flight to Sunday was postponed due to the weather. A good decision because on Sunday it was nice open flying weather with a light WZW wind. The pigeons were good enough so the hope was there to put down a good performance again.

It became a relatively “easy” flight. After 7 hours and 45 minutes the 257 a.k.a. Son Blueliner. Marit’s favorite. This cock had already shown that he could perform with fast flights because on Fontenay he already played an 8th NPO. It was soon clear that it was an early pigeon, but could he still add a top-10 rating? Unfortunately. The numbers 8,9,10 and 11 were all in the same meter speed and he became 11th. But it remains a top performance.

Iron Man finished in 13th place in one and a half minutes. After his beautiful victory over Argenton, he showed that it is becoming a real good one.

Because the prospect of a fast flight was real, we also basketed 4 pigeons from Team Kramer-Hsu. And yes, Wingman (348) – brother of Iron Man (from Flatscreen I x Corina) – flew a 20th NPO on his first one day long distance race. Not much later Darius (0000) also showed that he was fine again with a nice 26th NPO.

In short, with 4 early pigeons we could look back very satisfied on a beautiful one day long distance race.

Much has been said and written about Argenton, but there is no doubt that it was a very difficult flight. Released at 8 a.m. Then the pigeons start flying out for 10 hours. Yes there was a front over the north of France, but those pigeons should be able to go through this kind of weather. We have sometimes waited for them in the pouring rain after they had flown through over 150 km. showers. But things went a little differently. The first reports in ZH were delayed and then you start to fear. And then at 6:55 pm a pigeon suddenly comes flying low and walks quietly inside. That must be an early one because there was no pigeon in the club yet and only live South Holland pigeons were on the live compu club. Pretty soon after that we were at the top of the report list and we are waiting for the pigeons in the overflight. Normally it is very difficult to clock faster on a farther distance, certainly because of the headwind, but nevertheless four pigeons from Den Helder and Enkhuizen came very close. Very good. But the 1st NPO Argenton was for us, after we also played the 1st and 2nd NPO at Fontenay four weeks earlier. The pigeon that was responsible for this is the NL18-1771248 aka ‘Iron Man’. Given the circumstances a pigeon of iron. It is a small blue belt widower. Always beautiful and a body like a drop of water. Previously he won a 51st NPO against 5,862 pigeons and the 177th against 4,235 p. Iron Man’s father is Flatscreen 1. As a youngster, this pigeon won a flat screen (the first of the two we won) with a 3rd against 3000 pigeons on Lake (110 km.). After our move in 2012, he won 3rd NPO Chateaudun against 7,372 pigeons and the 16th NPO Orleans against 6,332 pigeons. Iron Man’s mother is Corina. This hen is bought via Pipa to the Gebr. Leytens from. Bought because her father ‘Kleine Bram’ was a fantastic one day long distance pigeon and her mother Britt the 4th Nat. WHZB hens was on the one day long distance with two top prizes. Corina is now mother of Jens with a 1st NPO Vierzon, Iron Man 1st NPO Argenton and grandmother of Bakero who won the 1st NPO Fontenay this year.

The following pigeons flew within the first 85 NPO:

It had long been certain that Issoudun would be a tough task for the pigeons. Warm weather and a NO wind. Only if your pigeons are top can you win such a competition. We were not completely satisfied with how the pigeons were basketed. They trained well but not super. Too little tension on the body. At least not as much as when they played 1,2 and 8 NPO from Fontenay. That, of course, is the benchmark. The expectations were therefore not very high. That came out exactly. The pigeons performed well, but not super. But with a 20th and a 28th NPO we can of course not complain. The first pigeon was somewhat of a surprise. It was the 622 or ‘Daniel’ who first tapped. We got this pigeon from Meindert de Jong from Oosterwolde and was bred from a pigeon from him of the Schaerlaeckens type. The mother comes from ourselves and is a daughter of the Blueliner. It took a while for ‘Daniel’ to get some meat on his body, but for Issoudun he was already much better than the weeks before.

The second pigeon was the 020 or ‘De Amsterdammer’. Really a pigeon for the heavy flights. As a yearling, he already played a 9th NPO from a tough Argenton last year. On the last one day long distance race, however, he came home seriously injured and the question was whether he would ever be able to perform again. Nevertheless, he is our favorite for the tough flights. We got the Amsterdammer from Marcel Kuijt and are bred from two pigeons from us. In short, we are saved by two pigeons that have been bred by someone else but who are (partly) out of their own species. Now let’s hope they are successful with it.

After the flight was postponed on Saturday due to bad weather, we met on Sunday with beautiful flying weather with a release at 7 a.m. The morning flight from Duffel became a very fast one and the pigeons came home very well. This gave hope for Fontenay. Prior to basketing, the pigeons showed that they were ready. The training sessions were completed at a rapid pace and the pigeons felt super when basketed. With a calm South West wind, speeds were expected between 1400 and 1350 mpm. So somewhere between 1 p.m. and 1.20 p.m. there should be pigeons. That also came out exactly. At 13:14 suddenly 4 pigeons flew above the loft, two of which landed on the valve. The two others continued in despair. At that time there was not yet reported in the club app, so there was the suspicion that they were two early pigeons. They soon came to the top of the Compuclub’s report list and then it was to be seen whether the overflight would throw a spanner in the works. Fortunately that did not happen (for us) and with 1,2 and 8 NPO this became a very nice result. The price percentage was also fine with 20 out of 26, 1 in 4.

We had basketed 22 pigeons for the first long distance flight of 2019 from Fontenay sur Eure. We left a number of yearlings at home considering the fact that this flight could be difficult due to weather conditions. But mainly because they have not yet got the required form. Afterwards this turned out to be a good choice because the pigeons were indeed not given it as a gift. The preseason was not entirely satisfactory, so the expectations were not high. But the Speed flight in the morning went very well with a 1st and 3rd in the club, so perhaps there was a surprise in it. Calculated at a speed of 1250 mpm, they should arrive at 2:20 pm. They did not make that speed, but at 2:31 pm two pigeons flew in from the southwest. One pigeon landed and did not lose a second upon entering. The other flew away, somewhat dazed. At that time no one had reported on the club app, so it was an early one in the club. The subsequent reports took a long time, so the hope for a real early rise. When our report appeared as a 4th on compuclub live, we knew for sure although the flight could of course still throw a spanner in the works. That did not happen, so the first Intertekst entry of the year became a fact. The pigeon that achieved this is “Duncan”, a medium-sized pear-shaped blue-band widower. Until now he had no real big achievements to his name, except for a few good prizes on the speed flights. But because of construction and pedigree we saw something in him and that is now being rewarded.